A few weeks back you learned about Cushing’s and Addison’s Disease, and you may recall that corticosteroids play a starring role in both disorders. So today we’ll be taking a deeper dive into the pharmacology of this very common class of medication. It’s used for a lot of disorders, has some pretty unique and significant side effects, and also comes with strict dosing schedules. Plus, it will most likely show up in your clinical rotations and definitely show up on your nursing school exams. So, let’s dive in!

What is a corticosteroid?

Before we get too far down the rabbit hole of corticosteroids, let’s talk about what they actually are. In the body, corticosteroids are sometimes referred to as the adrenocortical hormones because of where they are secreted (hint, it’s the adrenal glands!). They can be categorized into three subtypes: glucocorticoids, androgens and mineralocorticoids. Let’s break this down a bit further:

What are exogenous corticosteroids used for?

When we say something is “exogenous” we mean that we are supplying it. Think “extra” and that’s a good way to remember that “exogenous” means we’re adding something extra into the boyd. On the other hand, the corticosteroids that the body produces on its own would be referred to as “endogenous.” So, why does the body need EXTRA corticosteroids?

Corticosteroids are used to treat a variety of conditions as well as adrenal insufficiency (remember our patient with Addison’s Disease?). Some other reasons a patient may receive corticosteroid therapy are:

Corticosteroids come in many different forms

Corticosteroids are really versatile drugs coming in both short- and long-acting formulations that can be given as tablets, in an IV or as an IM injection. Topical formulations are also available and are what you typically see used for dermatologic conditions (tell story about Tom and his nasty poison oak problem). You may also give patients corticosteroids via inhalation for the treatment of respiratory disorders, and there even nasal sprays available as well.

Some of the most common corticosteroids and their uses are:

So as you can see, there are a lot of different types of corticosteroids as well as uses. Rather than look at the side effects and implications for each one, let’s look at the broad strokes for each main type (systemic vs non-systemic). Sound good?

Side effects of corticosteroids

Systemic Corticosteroids typically have the larger side effect profile, so let’s start there first. The main thing you need to know about systemic corticosteroids is they suppress the immune system, so your patient will have an increased risk for infection. Also, with long-term use there can be a re-distribution of body fat that leads to the patient having what’s called a “moon face” and “buffalo hump”. It can also cause the patient to have mood swings, increased hunger, fluid retention, hypertension, delayed wound healing osteoporosis and hyperglycemia. Also, there is increased risk for peptic ulcers, which can bleed uncontrollably and thromboembolism which can occlude a pulmonary artery and be fatal.

Remember that negative feedback loop where the pituitary reacts to low levels of cortisol by sending out ACTH to tell the adrenal glands to amp up their production and release of cortisol? Let’s say you have a patient who has been on prednisone for awhile and whose adrenal glands have completely gone on a little adrenal vacation. They haven’t had to work in a while, and we all know how hard it is to get back into the swing of things once we get back from vacation, right?

So, when someone is being taken off corticosteroid therapy, we don’t just abruptly stop it. That would be like you flying home from Hawaii at 2am and getting up at 5am to work a 12 hour shift the next day. That would not work well at all. That’s why you ease back into things after a big trip. You might unpack that first day, do some laundry and collect the mail. Then maaaybe you go back to work after that. In other words, you ramp up slowly.

After being out of the glucocorticoid releasing game for a while, the adrenal glands need to ease back into it in order to meet the body’s needs. So that’s why we taper patients off glucocorticoids like prednisone. It gives the adrenal glands time to get back into gear. Otherwise, an abrupt discontinuation could leave the patient with no ability to meet their cortisol needs sending them straight into an addisonian crisis. This whole concept of tapering off corticosteroids WILL BE ON THE EXAM. It always is.

So let’s say you’re faced with the following scenario

Bob is 56 years old, and is being treated for a flare up of rheumatoid arthritis with prednisone. He started it eight weeks ago and is now presenting to the wound care clinic for a wound on his leg that just won’t heal. He’s gained ten pounds since beginning the prednisone therapy with no signs of edema. Vital signs are HR 81, RR 17, BP 166/82, O2 saturation 97% on RA; joint pain is rated as a 2 on 0-10 scale. As you are assessing his wound and comparing it to the assessment two weeks ago, he says, “These pills make me so edgy, I eat non-stop and I hate how round my face is. I can’t wait to get off of them next week.”  The wound has not improved in the past two weeks, though it does not look infected at this time.

Based on this scenario, you could write some key care plan components, including:

Now, of course, nursing is all about fixing problems. So the interventions you’ll need to implement will be aimed at the nursing diagnoses listed above.

And then of course, you’ll need to list your expected outcomes, which for infection risk could be something like:

Your main takeaways for corticosteroids are:

Get this on audio in Episode 84!

I hope that helps you understand corticosteroids. Got questions? Share them in the comments below! 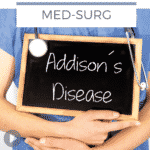